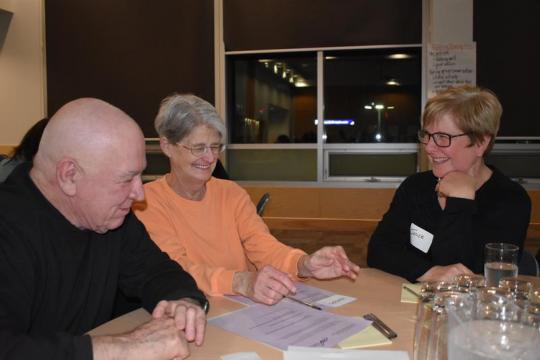 (Published in The News)

The Nova Scotia Health Authority gave residents of Pictou County an update on what it is doing to cope with a province-wide shortage of primary care physicians, and what measures are in place to make sure people get the care they need, on Wednesday evening.

Members of the Nova Scotia Health Authority (NSHA) and a number of residents of Pictou County sat down for a chat about healthcare in the Pictou County area, and Nova Scotia as a whole. Officials with the NSHA provided an update on the state of health care, particularly family services, noting that there are six vacancies for family physicians in Pictou County today.

The presentation focused on the health authority’s plans for the province, and how it intends to address the growing gaps in health care provisioning in Nova Scotia. A central premise to the presentation to guests was the utility of collaborative family practice teams – a central part of NSHA plans to rectify the shortage of doctors and gaps in healthcare in the province.

Over the years, millions of dollars have been invested in collaborative family practice teams, and guests were told at that net year, a total of $10 million of investment is anticipated to support those teams.

A premise of the session was that there is a need to recruit new physicians in Nova Scotia and Pictou County. There have recently been 18 expressions of interest from physicians looking to practice in Nova Scotia, noted Duane MacInnis, Primary Health Care Director, Northern Zone, Nova Scotia Health Authority.

Guests were given numbers associated with healthcare, including some troubling statistics, including the fact that 4.6 per cent of people in the Pictou County area don’t have a primary care provider.

“It should be zero, but you know what challenges we are up against” said MacInnis.

Later in the evening, MacInnis said that Pictou County, as a health region, is “ahead of the game,” and is equipped to handle the challenges associated with the lack of primary care doctors, through its use of collaborative family practice teams for the last 10-20 years. There has been an added emphasis on building those teams in the last three to four years, “They attract physicians, because physicians are often interested in working as a team. (collaborative family practice teams) enhance the care and there’s the added benefit that they attract health care providers – including family physicians,” said MacInnis.

A significant portion of the night was dedicated to getting the opinions of guests, who obliged with a number of perspectives.

“The good news is we’re sitting here, addressing the issue,” said a guest named James, speaking on behalf of a discussion group he was part of. “We can’t knock on people and point fingers – that’s not going to do a damn thing. As far as collaborative practice is concerned, we’re happy that maybe there’s going to be a reasonable mix of professionals. One interesting thing…is that we’re going to work, hand-in-hand with politicians.”

James noted that his discussion group wanted to know more about the health authority’s business model, “because right now, frankly, it stinks. We’re putting all these bucks in, and where are (they) going?”

Guests shared their concerns about matters like the shortcomings in the province’s health care service, that included issues with the 811 service, the role of nurses and nurse practitioners in relation to family doctors, and the aging population of Nova Scotia’s increasing medical needs. One common concern among many guests was the percentage of people in Pictou County who don’t have a primary care provider.

Moving forward, the health authority intends to review the responses it gets from the consultations it holds throughout the province.

Dr. Bill Lowe, Department Head, Family Medicine, Northern Zone, Nova Scotia Health Authority, said there are plans to work with Dalhousie University in expanding its residency and training programs into all the health care zones of the province. Some of these expansions include the idea of creating more openings in residency programs, reimbursing tuition to incentivize doctors to stay in the province and an effort to attract physicians from other parts of the country.