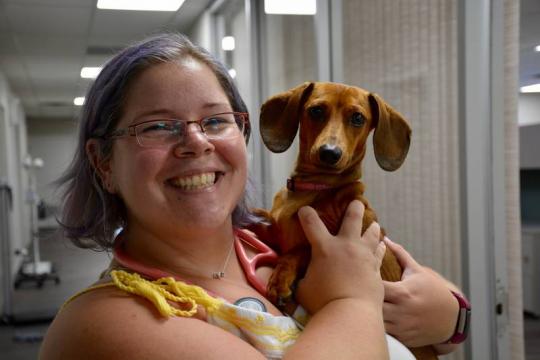 (Published in the Chronicle Herald)

Patients seeking a family doctor in the Windsor area may be in luck, with a new collaborative care clinic opening its doors.

Dr. Martina Babin is one of soon-to-be two general practitioners at the Avon Medical Clinic.

“A big part of setting up here in Windsor is the fact that it’s just outside of the city, but not quite a city,” Babin said.

“I’m a country girl. I like to be outside, hiking and things like that. Being in an area that offers that, but still a stone’s throw to the city makes it the best of both worlds.”

She said she sees a need for an influx of doctors in the area as more local physicians get closer to retiring.

“We are hoping to attract more health professionals,” she said.

“Right now, we’ve got two doctors on board, a nurse practitioner and a family practice nurse. It would be great to see more, eventually having specialists come in to do specialized clinics to help with the chronic care we so desperately need.”

While Windsor now has some new healthcare professionals operating in town, some communities aren’t so lucky.

“Having practiced in Nova Scotia for a year, then New Brunswick, and now being back here, the governance of the medical system here is quite challenging,” she said. “Medications, especially through the pharmacare program that would normally be used to control chronic conditions are difficult to access. We have to jump through a bunch of hoops before getting access to certain medications to treat things like diabetes. It’s very frustrating.”

Still, Babin said the experience in Windsor so far has been an amazing one.

“We have a great team here, we’ve all melded well together,” she said.

“As long as you can get a team like this together, other communities could definitely use this as a structure to help serve the people.”

Krista Trider, co-owner of the Avon Medical Clinic and the Windsor Pharmasave, said the facility has been years in the making.

“About five years ago, the health authority came to us and they were trying to do some planning in Windsor, which was one of the rural areas where they were looking to make sure there was enough access to primary healthcare,” Trider said.

“They were looking for partners in the community to create collaborative practices, and we’ve been working with them for years to make this happen.”

It took a lot of time to establish because the building, literally right next door to the Windsor Pharmasave, required extensive renovations.

“It was a pretty big commitment to get this space ready along with all of the operational things that had to happen,” she said.

Doors are now open to the public, with a grand opening planned for either September or October.

The Avon Medical Clinic is what’s known as a collaborative care centre, something that’s becoming much more common across Nova Scotia, replacing the traditional doctor’s office.

Physicians work hand-in-hand with nurse practitioners to provide clients with a wide range of healthcare services.

Currently there’s one doctor at the Avon clinic, Dr. Babin, as well as a nurse practitioner and a family practice nurse.

A second physician will be joining their ranks in October.

“They work collaboratively, which is the model the government is adopting in various communities across the province,” Trider said.

“The team works together to support the best patient care.”

For Trider, who works as a pharmacist with her husband, Jason, next door, they wanted this to be the next step in the evolution of their business.

“It’s about recognizing the needs of the community, and wanting to give back,” she said. “It made sense for the practice to be adjacent to the pharmacy.”

Patients will be able to go through the practice right into the pharmacy to fill their prescriptions.

Trider admits opening a medical practice was a huge learning curve for them, but they’ve had support from both the province and other clinic operators.

“There are quite a few people in our community who don’t have a family doctor and who need healthcare,” she said.

The demand for services is steadily increasing as chronic disease and illness are realities that cannot be ignored in a province with an aging population.

“A lot of people don’t have the means to travel far to get to a family doctor, so it’s important for the community that we have infrastructure and the opportunity for primary healthcare right here in our community,” she said.

They turned to a physician recruiter for help finding doctors for the clinic.

“We do feel a loyalty to downtown Windsor, it’s changed over the years, and we like to see life and vitality within the downtown.”

“People have been coming to us to say they haven’t had a family doctor for a while, and now they do,” she said.

“It’s really nice to hear those comments and to see the relief that people have.”

They were fortunate to be able to get one, and possibly two, doctors at their centre so quickly.

“The Department of Health had Windsor as a priority area, given the number of physicians in this area who were nearing retirement age,” she said.

“They saw that there could be a critical shortage in the future. They had Windsor top of mind.”

Although they’re still getting things off of the ground, Trider said there’s already room for them to grow the team.

And that’s good news for patients.

Arthur Hirtle, who lives in Windsor, uses a cane to get around following a stroke.

For now, he will have to continue to see his family doctor in Kentville, although he’s pleased to see more physicians in the Windsor area.

“I would consider it if I could get in but, if you already have a doctor, the health system doesn’t really want to move you,” said Hirtle, who makes relatively frequent trips to the doctor.

“It would be nice to have one closer to home.”

Tracy Barron, media relations advisory with the Department of Health and Wellness, said collaborative care practices like the Avon Medical Clinic are becoming more common across the province as a way to deliver healthcare to rural and smaller communities.

“It's a way of supporting doctors, nurses and other health professionals by working in a team environment, something they have told us they want to do,” Barron said.

“Creating and expanding these teams is an important tool to recruit and retain doctors across the province and makes a significant contribution to providing access to care for those waiting for a family practice.”

The Nova Scotia Health Authority has heard from more than 400 family doctors across the province who have expressed interest in working in a collaborative family practice team, Barron said.

“The Avon Medical Clinic was one of the clinics selected and have added a nurse practitioner and family practice nurse to their team providing more support for Windsor and the surrounding areas,” she added.

“We have more than 50 family practice teams in various stages of development around the province, and will continue to expand and enhance more teams to help improve access for Nova Scotians.”