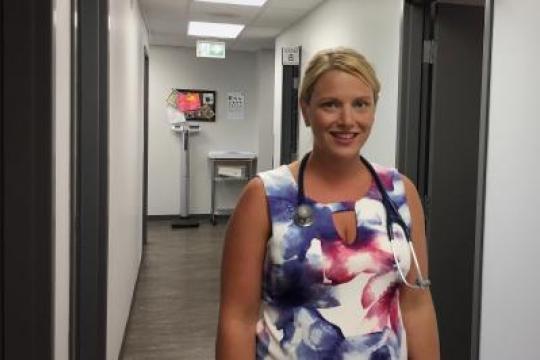 When Dr. Amanda MacDonald and a fellow doctor initially opened their Windsor medical practice four years ago, there was a lineup of would-be patients stretching around the building and down the block on opening day.

“For the first couple of weeks it was utter mayhem,” she said.

Soon after, the clinic was left with a waiting list they maintained in-house and referred to as they were able to take on new patients.

“It was very labour-intensive for our staff in terms of people calling, trying to get on the wait list; we’d call people off the wait list and find that they’d moved, or already had family physicians,” Dr. MacDonald said. Many of those patients would have had their names on similar lists at different practices at the same time.

Over time the practice has grown into a collaborative model that includes three doctors, a nurse practitioner and family practice nurse. Soon a social worker will be joining the team.

With these and other changes, they’ve worked through the original waiting list and have found capacity to add more patients. Rather than managing that directly, the practice is working with the provincial Need a Family Practice registry, sometimes called the 811 registry.

“The 811 list made it much, much simpler from our perspective to take patients on in batches over time as we felt we could do so adequately while ensuring that the care for our existing patients wasn’t interrupted,” Dr. MacDonald said.

Staff can also have confidence that the names and contacts coming from the registry will be accurate and people who are no longer seeking a provider will have been removed.

Since the registry was launched in November 2016, NSHA has added staff who call patients on the list before their names are sent to practices as a way to support the collaborative family practice team and providers.

Patients have appreciated the ease of getting on the list—and fortunately in the Windsor area, people have been accepted by practices fairly quickly.

The practice has taken about 1,500 patients from the registry altogether.

“I think the other advantage to patients is they have assurance that there is a due process and it’s a fair process,” Dr. MacDonald said. “They know if their name is on they’re going to be accepted in a timely fashion.”

She said as she is able to take on more patients in the future, she will continue to draw them from the Need a Family Practice registry.

While Dr. MacDonald began her practice from scratch, she said the registry also provides a manageable way for a doctor taking over the practice of another doctor to do so in a responsible, effective way.

“For incoming physicians, the old model of taking on a retiring or leaving physician’s (patients) is no longer desirable or sustainable. It is too overwhelming to expect a new doctor to all at once be responsible for all incoming lab and test results, ED notes, and consults for hundreds of people that they have never even met and it’s hard to predict how many patients you can accommodate,” she said. “It’s taken me several years to have the patient volume I have now. I think that being able to grow your practice slowly through the use of the registry rather than taking on an entire patient list all at once is a much more fair way to do it for an incoming physician.

You can add your name to the Need a Family Practice Registry online or by calling 811 Monday to Friday, 10 a.m. to 6 p.m.