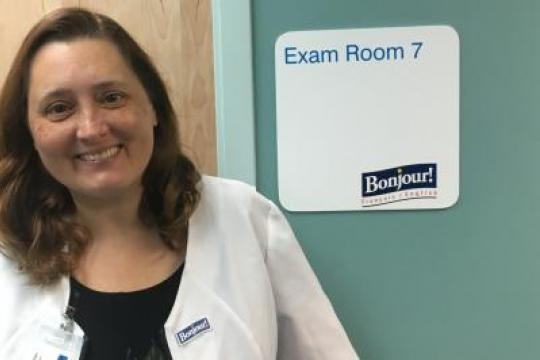 Gabriela Vellego’s first language is Portuguese. She also speaks fluent French, English and Spanish and is learning German and Italian. Languages aren’t just an interest for Vellego; they’re a passion.

Vellego joined Digby Community Health Centre and Islands Health Centre as a nurse practitioner in May. She was quick to sign up for the Bonjour Program whereby staff indicate they can speak French by wearing or posting the Bonjour symbol in their work area. For patients in the area who speak French, having a provider who speaks their language makes a big difference.

“Patients are so happy to have someone who shares their mother language,” said Vellego, who has spent many years providing service in multiple languages, including 10 years in Quebec.

For patients experiencing mental health challenges, having a provider speak their first language is especially helpful, said Vellego. “When you’re talking through personal issues, you just want to communicate in the language you’re most familiar with – to express your feelings and thoughts.”

Ultimately, speaking the patient’s preferred language is all about forming a connection. “I am a nurse first and foremost. When you can connect with the person – their background and culture and the way they feel, it’s a kind of respect.”