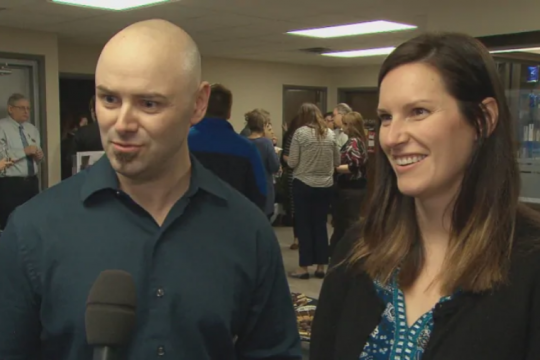 'You feel like you're needed in the community and people want you to be here,' new recruit says

When Jacqueline Green and her husband, Matthew Stacey, decided it was time to leave their lives in the North, they knew they were taking a big leap.

But after three days of being wined and dined by people in Kentville, N.S., they know now there's no turning back.

"You feel like you're needed in the community and people want you to be here. It really helps," said Green, a nurse practitioner who is moving from Rankin Inlet, Nunavut, to start working in the Centennial Professional Centre in May.

Green was recruited by the Nova Scotia Health Authority, and then the community stepped in to make sure she wouldn't change her mind.

She's the first health-care professional to receive an over-the-top welcome, which is all part of a new effort to recruit and retain workers to the area.

Kentville has largely avoided the province's doctor shortage, but eight months ago, a wave of retirements began. Mayor Sandra Snow said they are now short seven or eight family physicians.

"All of a sudden with these retirements, people are concerned, they've had the same doctor for 40 years," said Snow. "We're going to welcome them with open arms."

On Monday, Snow gave Green, Stacey and their two daughters a lengthy tour of the community, showing them schools, walking trails and the recreational facilities.

"When people come to town and they're making big decisions about where to buy a house, sometimes knowing ... the environment around you really helps you make a decision," said Snow.

After the tour, clinic owner Maresa Davidson took over, hosting a party to introduce the couple to dozens of people in the community.

Davidson served local wine and food, while town officials presented the pair with a welcome basket.

"We are all working very hard to fill in the gaps of general practitioners, and it's a big score for us actually," said Davidson.

The concept of communities working closely with recruiters has proven successful in other towns across the country.

Green and Stacey say they're flabbergasted by the welcome, and it's made them confident that they've made the best decision for their family. They're encouraging other towns to follow suit as they recruit health professionals.

"You're not going to get that from just a health authority," said Stacey. "Having the community engaged and help welcome it really makes a huge difference. And I think it's actually more of a difference than the financial compensation thing."

Green said the best part was to see how her kids reacted to the royal treatment, and spending a day with the mayor.

"My daughter was like 'Oh, I want to be a police officer and a mayor when I grow up.'"