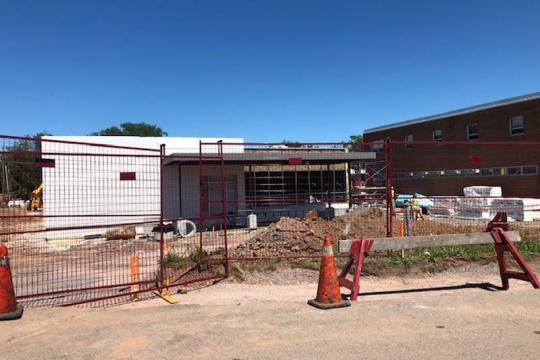 (Published by the Kings County Advertiser/Register)

Support is rolling in for a community-based campaign that aims to help the Soldiers Memorial Hospital Foundation meet a million-dollar goal.

The non-profit organization recently received $50,000 commitments from the Rotary Club of Middleton, Town of Middleton, Municipality of the County of Annapolis and the Municipality of the County of Kings in support of the new primary health-care centre that is under construction beside Soldiers Memorial Hospital. Dexter Construction is contributing an additional $25,000.

On top of a $100,000 donation coming from the hospital foundation itself, the recent influx of sizeable donations elevated the fundraising total to date to about $360,000.

The foundation is on the hook for raising $1 million at the community level to back the $12-million project.

“It is by far the most ambitious fundraising project that we have undertaken since the foundation was started in 1972,” said Soldiers Memorial Hospital Foundation chairman Jim Mosher.

The new centre built around a collaborative care model will replace a nearby family practice building that the foundation purchased in 1982.

“There is no capacity for growth at the current clinic and patients looking for a family doctor are frequently turned away, which places stress on the hospital’s emergency department,” said Mosher.

The Middleton-based hospital serves parts of western Kings and Annapolis County, an area that has been hard hit by the retirement of several established family doctors in recent years.

As of June 1, provincial health statistics indicated that 4,581 of the 9,458 residents of Annapolis and Kings counties waiting to be placed with a family practice were in the Middleton catchment area.

Plans are in place to have members of the Dalhousie Family Medicine resident training program based in the new clinic to gain experience working with a family practice team.

“It has proven successful in recruiting new doctors to our own region, including two of the four doctors who are currently at the Middleton Collaborative Family Practice,” said Mosher.

The existing services at Soldiers Memorial Hospital will remain in place, including in-patient and emergency care, diagnostic services, the laboratory, and rehabilitative services.

“We expect it will complement the hospital, along with other health-care teams and services currently available, and ultimately will enhance the overall health-care offered here,” said Mosher.

The hospital foundation is in the midst of a fundraising campaign that was softly launched in the spring. They started out with written submissions to potential donors in order to adhere to public health guidelines in place during the COVID-19 pandemic, and they will arrange for socially-distanced meetings as permitted.

“Having a facility such as the new primary health-care centre is a tremendous community asset that will benefit everyone,” said Mosher.