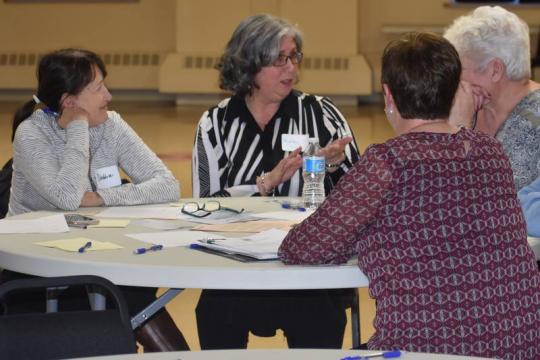 Creating teams of physicians, nurse practitioners and other health-care providers won’t just help people who don’t have family doctors — it could save lives.

The collaborative-care teams — which could also include family practice nurses and social workers, as well as dietitians, physiotherapists and other professionals — are expected to help alleviate the strain on the province’s overburdened health-care system.

MacMullin, whose two children suffered what she called “severe mental health issues,” said one of the biggest benefits would be quicker access to social workers.

“If I brought my children or myself into the practice, my doctor would recognize very quickly that we have somebody we could see, so instead of waiting the 100 days, the 200 days, there’s someone that can see me right away in that clinic,” said MacMullin, who is a Cape Breton Regional Municipality councillor. “And I think that would open the door and get me into the system a lot faster.

“And for the record, when I say mental health issues, I dealt with the attempted suicide of one of my children and the other wasn’t far behind, and it was a social worker that she actually went to see for a year and a half and it’s the social worker who brought her around.

“I personally owe the life of one of my children to (a social worker) so I see that if we have these collaborative care clinics all over CBRM that is really going to make a difference in mental health very quickly.”

For most of the approximately 25 people at Monday’s session at the Grand Lake Road fire hall, it wasn’t a question of if they’d like to see the collaborative family practice teams in place, but when.

Dr. Peter Littlejohn helped start a similar team in New Waterford more than 10 years ago. They currently have seven doctors, two nurse practitioners and a dietitian, and expect to bring a family practice nurse and social worker on board soon. He said collaborative health teams are not a new idea, and the sooner they are put into practice the better.

“We need to push, we need to get health care responding more to the communities and more to the needs that are there,” he said.

“These discussions have been going on far too long. There is movement and it’s good to see that movement, but we could have been here 10 years ago, 15 years ago, and we haven’t because of a variety of factors.

“We’ve just got to work out how to do more with what we have.”

“Finally. Finally. It’s been a long time. We did have pilot studies done since 2006 (that) proved the collaborative model would work,” she said.

Kathy Bell, Nova Scotia Health Authority director of primary health care for the Eastern Zone, said there are currently two existing teams in Sydney and one each in New Waterford and Glace Bay. A North Sydney team is ready to begin seeing patients this spring, with nine doctors and two family practice nurses already signed on. They are currently looking for a social worker after the person they originally hired took a job elsewhere.

According to the health authority, as of March 19, 2,076 people in Cape Breton County without a family doctor had added their names to a provincial registry requesting to join a family practice registry. That includes 1,218 people in Dominion and Glace Bay; 713 in North Sydney, Sydney Mines and Florence; 20 people in New Waterford; and 116 in Sydney.

“I definitely think it’s a solution to some of the health-care problem,” said Bell.

“It provides that one-stop shop for people, because we are creatures of habit, we like to go to that one place. So, if we can provide the resources at that one spot, then they can go there, it can prevent trips to emergency, hospitalization — those sorts of things.”

Bell said the goal is to have one team in place to serve the needs of 10,000 patients in a given area. Eventually the health authority would like to have five teams in place in Sydney and two in Glace Bay and North Sydney.

People without a doctor are asked to register through the province’s 811 health information phone system, or online by visiting needafamilypractice.nshealth.ca.