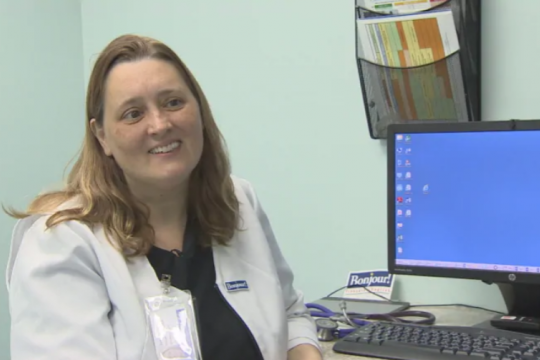 When Gabriela Vellego drove off the ferry last summer and into Digby, N.S., with her husband and three-year-old son in tow, she knew instantly this would be her new home.

Her family had been living outside Montreal and were looking forward to an East Coast vacation. She had no idea that vacation would become such a turning point in her life.

"It's definitely the best thing that's happened to us," she says.

Today, Vellego is one of three nurse practitioners working at the Digby Health Services Centre.

Her accidental journey here started in her home city of Sao Paulo, Brazil — the fourth largest city on the planet with a population of more than 12 million people. It's a world away from Digby, population: 2,000. What the two do share is the Atlantic Ocean.

"I had all these childhood memories of living near the sea and having that experience and that's something that I'd like to share with my husband and kid and I thought, 'Why not? That could be so nice,'" she says.

Vellego earned her nursing degree in Sao Paulo and eventually moved to Montreal where she spent 10 years as a registered nurse.

She got her masters of nursing from Laval University and earned her qualifications as a nurse practitioner.

Along the way, she became multilingual. Portuguese is her first language but after 10 years in Quebec, she now speaks fluent French. She picked up German from her husband and eventually took on English as her fourth language.

Though she speaks it fluently — with a distinct Portuguese accent — Vellego says her command of the language was the only professional hurdle to starting her new life in Digby.

She took English tests required by the College of Registered Nurses of Nova Scotia, but failed three times.

"It was harder than I expected," she says.

Compared to the French test she took in Quebec — and passed on her first try — she found the English tests to be more demanding and not based on any practical day-to-day nursing.

"I feel comfortable with my patients," she says. "But the writing part was so academic."

Eventually, the college was satisfied with her English-speaking skills and she settled into her practice at the Digby Health Services Centre.

On this September afternoon after lunch, one of Vellego's patients, Thomas Haynes-Paton, has come by for a routine visit.

"I guess so far I've been quite impressed with her knowledge and background," says Haynes-Paton. "And more importantly, her willingness to listen."