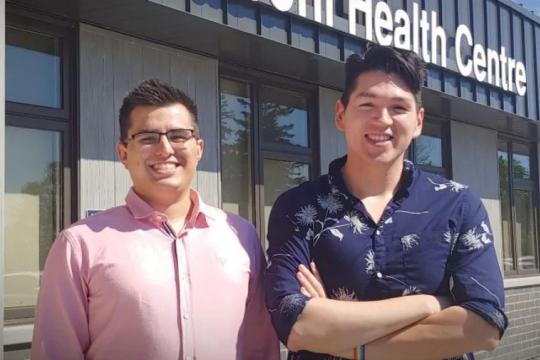 Working at the Eskasoni Health Centre is like coming home for a new doctor and a new nurse practitioner.

Athanasius Tanas Sylliboy of Eskasoni started working as a nurse practitioner at the centre in April. Dr. Carl Marshall, originally from nearby Potlotek First Nation, started his family practice at the centre earlier this month.

Both said it has already been rewarding working with patients in their own culture and community, and the reception has been warm.

"I'm really happy that I'm back home now and working in a Mi'kmaw community like I had been planning for all these years," said Marshall.

"It's definitely better, speaking with the patients, having somebody more familiar that they can interact with and more comfortable approaching."

Marshall went to medical school at McMaster University in Hamilton, Ont. He said that while some of his classmates were Indigenous, he is among only a handful of Mi'kmaw doctors in Nova Scotia.

Hoping to be a role model

The newly minted doctor said he hopes to change that.

"I'm really hoping that we'll see more young people trying to pursue the field of health care, not just doctors but nursing, nurse practitioner, social worker, because we need them here in our community."

Marshall said patients have already opened up to him. He said they might be reluctant to do so with another doctor who does not come from the community.

"For some [medical] students, never having been to a community like Eskasoni, coming here it can be really daunting, because it's hard to get patients to open up to you," he said.

He said because he had a connection he could get people to be more open with him.

"That's not to say people from outside the community can't do that. We've actually had some excellent people not from here and really invested their whole lives into our community, but there's definitely an advantage to being from here.

"We just want good people that are willing to help and I think having a few that are from our community is definitely beneficial."

Sylliboy is a registered nurse who got his undergraduate degree at Cape Breton University and has worked in various settings before landing a position at the Eskasoni Health Centre.

He said being born and raised in Eskasoni, he wasn't sure people would trust him, but they have surprised him.

"The first few weeks, even doing my practice rotations here, people were like, 'Oh my God, where were you,' and the same with Dr. Marshall," Sylliboy said.

Many community members are suspicious of the health-care system, having experienced years of racist attitudes, he said.

"I think people like myself and Dr. Marshall are certainly the stepping stones to help build that bridge to build a better relationship," Sylliboy said.

The $10-million Eskasoni Health Centre opened two years ago with more than 100 staff members who are mostly Mi'kmaq.

Sylliboy said the centre includes a variety of health-care providers who work together to address some of the chronic issues facing the community.

"I really love the team-based approach, because as a community, we are a big team and we are a big family," he said.

Marshall and Sylliboy both said they are proud of their heritage and proud to make a difference by helping people in their own community.

"I carry that with me into work and ... I've definitely got a lot of good feedback from patients expressing that they're really happy to have somebody Mi'kmaw working here," Marshall said.